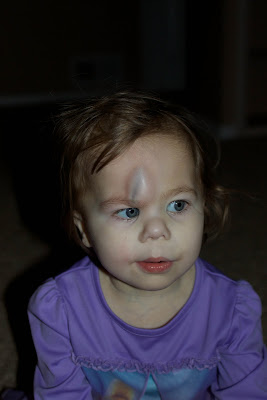 Had a fight with the wall, and the wall won! Poor thing tripped and hit the corner of the wall right with her noggin! My poor husband was right there but couldn't catch her fast enough. It was like it happened in slow motion but neither one of us could get there in time to prevent the inevitable. Ugh! She was a champ letting me hold an ice pack on it last night. We kept her awake in fear that she had a concussion. I gave her some Tylenol because I KNOW that she had to have had a headache after this! Good news is that the swelling is gone but the ugliness of it will last a little while. Oh man, and is it ugly! Poor baby!!!!!!! ;( Keeping an eye on the bruising. Post transplant kids sometimes have trouble with bruising. I will call if it doesn't go away ;)
Posted by Lindsay Dean at 3:17 PM

My son had a fight with the wall the other day. I definitely would say the wall won our fight too. He bled everywhere, but your daughter definitely looks a bit worse. I'm sorry. She's tough! Maybe she'll brag about it!

GASP!!! Oh my own head hurts just to look at that shiner! POOR BABY GIRL!! Hope she's getting lollipops along with the ice and catered to every whim!

WOW! and OW!!! What a goose egg! Sure hope there are no complications! At the very least she'll probably have a dilly of a black eye. It's a good thing kids are resilient!
Cousin Nancy