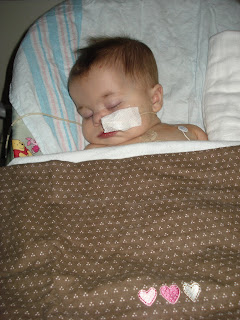 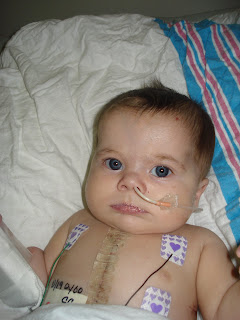 Lindsay has had a pretty good day weaning off some of her meds and getting better with her feeds. She has started to get this funky rash however, and the doctors can't seem to figure out what it is. She will have it in one place, half an hour later, it is gone. Then, it reappears....you get the idea. So, as that continues to be a mystery, she is getting the healing done. She has had some leaking in one of her lines in her groin, so they had to take her down to the cath lab today to insert a PICC line instead. This one is in her arm instead of the groin, so that must be more comfortable for her. While they were down there, the doctors were able to get some pressures around her heart needed for the transplant listing. Might as well since they were there and won't have to go to the cath lab....again. Geesh! Poor girl has been sedated for over 2 weeks now! Which, if she has a hard time coming off the sedation, they will start methadone to help her wean. I really don't think she is having trouble, but with Lindsay, you never know! :-) We left tonight with her sleeping soundly so hopefully,Lisa (one of our favorite nurses!!), doesn't have too much trouble with her. Keep the prayers coming. Each and every one is working and God is certainly listening. Love to you all!

Suzie
PS Has anyone noticed all the hair that she has grown on the top of her head in the last 3 weeks! WHOO HOO! Now she can start wearing the real clip in bows...maybe a ponytail in her near future????
Posted by Lindsay Dean at 11:52 PM

Hi guys! Not sure if you remember me, but I found you blog via Annabelle's. I just wanted to let you know that we are still praying each and every day for your sweet Lindsay. All of the heart babies are in our hearts and prayers. God bless you all and your journey. I know that none of this is easy, but I believe that you guys are doing an AMAZING job with Lindsay!!!! Keep up the great faith!

Thanks for the update Sis! She sure is beautiful sitting there. I can't wait to see her this weekend on our trip to MI. The boys are excited I think. At least Brae is b/c he keeps saying, "Cole" and "Cruz" and "Linly" Lol! Too cute! Well its 2AM in Augusta, GA and can't sleep, but just wanted to check on you and the little one. Have a great night! We love you all!

Oh, she definitely has enough hair to use the "real" clip! She's so darling...looks wonderful for all she's been through in the past few weeks! Her incision looks great too after the reopening/closing
3x. I'm amazed at what your family has had to go through. Keep it up, you're an inspiration for us all!
Love,
Katie

Yeah!!!! Lindsay doll is doing so well and we are so proud of all of you for your fight. Don't ever give up!!!! Amanda said that every picture of Lindsay looks cuter and cuter!! Thanks so much for sharing your life with us. You will always be in our prayers.

Love,
Alison and the rest of the Lees

P.S. That fight song has got to go. You are torturing us!!!

Soon like things are progressing. We are so glad to hear that. We are leaving to come home tomorrow and will check in on you then.

Lots of good thoughts and prayers coming your way.

PS: Great to see pictures of the boys they look great also.

Suzie,
The first thing I noticed when I saw the new pictures, was how much hair Lindsay has grown. Reagan will be 1 next month, and Lindsay is WAY ahead of her in the hair category! Way to go Lindsay! I think Reagan must take after her mommy and daddy and will be a "toe head" for a long time. Take Care.
Love,
Travis, Jill & Reagan

She looks so beautiful! Can I just tell you how much trouble you are going to be in with those cute pouty lips? I speak from experience!!
Pretty soon you guys are going to be home, back to the mundane things like cooking dinner, helping with Cole's "homework" and cleaning fingerprints off everything! Never sounded so good did it? You both are teaching us all at home how to be grateful for those "mundane activities". Thanks so much for that reminder. As always, we love you and are continuing to pray. Every time my kids hear the music from the blog, they coming running to check on Baby Lindsay. So cute!

Hi Suzie and Jr. She looks so cute!
I just see Cruz in her so much, must be the eyes. I got to see him yesterday when Sue dropped off Cole, he wanted to come over after his lunch w/last yrs preschool kids. He didn't have alot of time, but he said he wanted to come over. Cruz looks so good too, hope the dr.'s appt goes well this wk. Everyday gets better for your little princess, keep up the good faith, we are!
love and prayers
Don and Brenda

She looks great! You are all still in our prayers!

She really is so beautiful..I'm so happy to see her eyes open and looking like she is feeling a little better. I can't wait until you have her back home, line and tube free. You have been through so much recently and your strength through it all has been amazing. We continue to pray for you and for your sweetheart that everything will work itself out.
Love,
Avery and Bela

You are all in my prayers everyday. Lindsay is sooo precious, and such a fighter! She looks amazing for all that she has been through. You two, are such a team, coping with all of this. I knew when you both were MUCH younger, that you each had strengths. Thank goodness and the Man above, those strengths compliment one another.
Oh, and, is there somewhere to register as a 'stalker'? Because I am a definite convert. lol. Loads of love to all of you.
Sharon Y

I AM JUST GOING TO PUT A SMALL NOTE HERE BECAUSE OF RICK AND DEBBIES POST ABOUT NEEDING MONEY FOR RONALD M. HOUSE. A COMMITTTEE HAS FORMED TO PROVIDE A FUNDRAISING VEHICLE VIA A LINDSAY DEAN HEART FUND, WHICH WILL EVENTUALLY BE THROUGH A FOUNDATION. THE COMMITTEE MEMBER WHO IS GOING TO POST ALL THIS HAS HAD A FAMILY DEATH BUT WILL GET TO IT SOON AND EXPLAIN EVERYTHING. SINCE PEOPLE ARE ASKING THE QUESTION, MANY MORE OF YOU ARE THINKING IT! WE HAVE SOME EXCITING PLANS...SO WATCH FOR IT SOON. IN THE MEANTIME, BE PATIENT AND SAVE UP YOUR MONEY!! :)

For anyone going to the Parchment football game this weekend, we will be having a bake sale for Lindsay...we are the ladies in the pink ribbons!!

PS Suzie...of course I noticed all the hair! she is sooo beautiful!

It is so great to see her eyes wide open and yes the hair is so awesome. Still praying for all of you.

She is looking beautiful! Still praying for quick healing and wonderful health!!!!

Her hair is absolutely gorgeous....she'll have cute little pigtails in no time! :)

It's funny that you mentioned her hair. The first thing that popped in my head when I looked at the newest pics was 'wow, she's got some great hair!'. She is adorable! My thoughts and prayers are with you and hope you will be home together as a family soon!