That would be a GOOD busy! Enjoy!

OK, I'm starting off with the "whopper"! Now if this isn't the greatest sight! Three miracle children all together and NOT in the hospital this time.......priceless. Brittney, Lindsay, and Tommy...........oh how we are blessed to have them all! 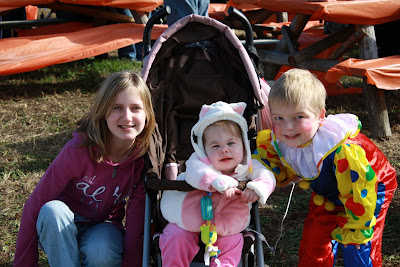 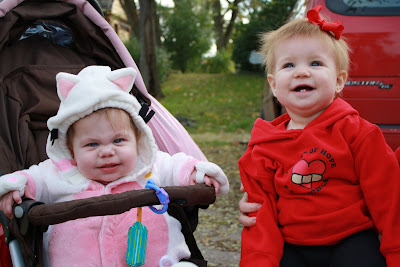 Weekend before last, we went to the annual fall picnic that Hearts of Hope puts on for all the heart children and their families. The kids could dress up if they wanted to and they were able to go on a wagon ride, pick their own pumpkins, have all the hot dogs and drinks they wanted, and even got to pet some pretty cute animals in the barn! The above picture is of Lindsay and another adorable little heart sister, Madison. Madison was at U of M in November......as were we! ;-) ha ha 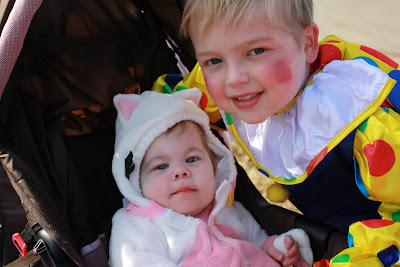 Isn't this the cutest clown and kitty that you have ever seen? Lindsay and Tommy........cute together huh? ha ha Colleen and I were tearing up as we took this photo. Oh, what a journey! AND check out those pretty PINK lips people!!!!! Oh, what a new heart can do!
Speaking of "oh, what a journey", I have quite the story for you! We headed to the hotel that we were staying at the night before the picnic and got an early start in order to watch the U of M football game at the hotel and then after the game, we could take the boys swimming and then order pizza and have a slumber party with all three kids! Sounds good, right? Well, not so much! It was raining when we got to the hotel so we went as fast as we could (yup, hubby still on crutches!) into the lobby and we were going to stay in the room until it stopped raining to get the rest of our stuff. So, in time, it stopped raining and I went down with a luggage cart and loaded it up with our things. Made one quick check around Lindsay's car seat to see if I got everything and happened to glance into her car seat. Hmmmmmm, a g-tube isn't supposed to be laying there! It is supposed to be ATTACHED to her! OMG!!!!! I asked myself.....when in the **** did that come out?!!! Knowing that we only had a few hours before the "hole" in her stomach would close up!! So, I very swiftly went up to the room, started flinging things around to unload and looked at my husband and said, " We can't do anything easily can we?" Hubby: "What do you mean?" Showed him the "escaped" g-tube and he looked at it in disbelief! Hubby: " Oh My God!" "What are we going to do?" Of course I don't have my emergency g-tube kit with me......so, knowing that Colleen and Tommy aren't that far away, I called her to get a recommendation on which hospital to go to. Beaumont Royal Oak was phenomenal but I do not want to go there again! ha ha Lindsay is the proud owner of a new g-tube and was just fine in the meantime. So, instead of a relaxing evening with the fam, we spent it apart for about 4 hours, picked up Burger King on my way back, took the kids for a quick 45 minute swim at 9:30 at night and then went to bed.....or so we thought! Lindsay decided to have a late night party in her pack-n-play and was up from 1am until 5 am. Fun Stuff! Oh well. Attending the picnic was worth it in every way and thankfully, we had an uneventful ride home that afternoon. Thanks Hearts of Hope for such a great day! 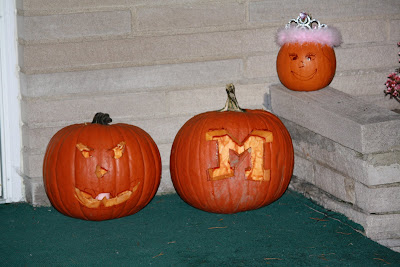 Cruz wanted a pumpkin with scary eyes, Cole, of course, a block M, and Lindsay's was a "pretty princess" says Cruz. ;-) 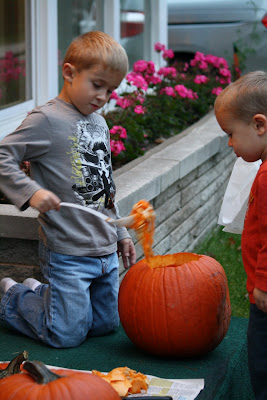 Cole "gutting" the pumpkin. (can you tell that he is in hunting mode now??) Cruz just wanted to watch. He said that it looked "distgustin" . ha ha 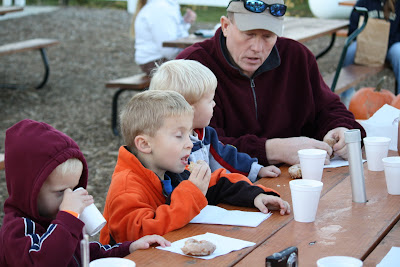 My brother's boys were here for a visit and this photo was after a visit to the pumpkin patch to play. Yummy.......cider and donuts always make you feel better......and before dinner to boot! 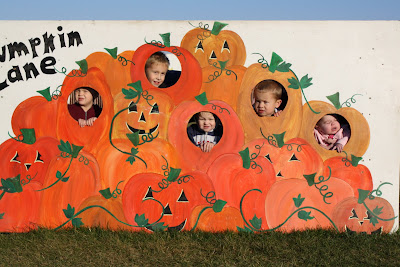 You can give me an "A" for effort. Attempting to get five children to look the same way at precisely the same time was virtually impossible but I think we did ok. 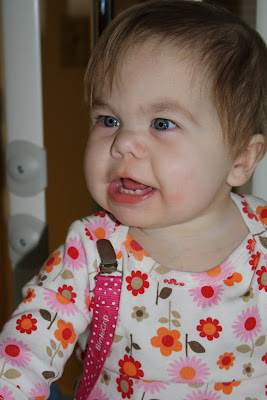 Lindsay two days after her scary airlift to the hospital. MUCH better as you can see! 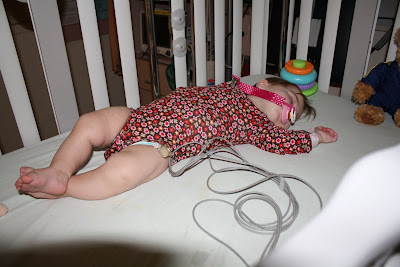 This was Lindsay the morning after her helicopter ride to U of M. This is how we felt too!

Oh Suzie
THe new header picture is just STUNNING! (brown and pink is a favorite at our house too:-)

Loved this last post. My, these little heart babies dont do ANYTHING without leaving a wake, do they? Glad you guys had fun on your trip and added yet another hospital to your "tour of homes" :-)

The princess pumpkin is SO her - too cute!
kisses to the kitty cat from the lady bug!
Evie and Mommy

All of these pictures are wonderful...but seeing her in person yesterday: PRICELESS!!! And the falling asleep in a second was hilarious...one minute she was mugging at all her admirers and the next... ASLEEP! Oh how we love her and her adorable brothers. Love the sleeping picture in Chez Mott...love love LOVE those yummy chunky thighs!!! Oh and pink feet!!

Love you all, Elaine

I am loving all the pictures of Lindsay and her heart friends! So glad you are staying busy and that you are HOME this Halloween. What a blessing!

The Gtube story freaked me out.. can they just fall out??? I'm glad you got it back in in time.

Again, you managed to get me teary eyed! I follow Lindsey, Tommy, and Britney, although I don't know any of them IRL. They look so wonderful!!!! Just seeing that picture made my day! Amazing....

So wonderful to see Lindsay enjoying such a fun day at the Hearts of Hope picnic and your boys are absolutely the cutest!!
The picture of Brittney, Lindsay & Tommy.....what can I say....beautiful blessings!!
Shannon, Chris & Madison also had a GREAT time! LOVE the pictures that they took also...what a great event!!
Gramma TJC

I looked at the pictures prior to reading the message and thought, "Wow, look how pink Lindsay's and Tommy's lips are!" It is amazing to see the beautiful children living life to the fullest!
Amy Knisley
Heart Mom to Mason

So awesome to see the kids just being kids!!
God is good, Suz' - you are so right.

All our love,
Cara, Warren & Avery

airlift what?? I am behind!!

I will read up. I agree with you on that picture is priceless- all three kids- happy...halloweening. So great!!

Mia has that same shirt as Lindsay... now they can be heart and clothes twins. I'll have to take a picture of her wearing it.

Listening to the radio, I heard the Avril Lavigne song you play on your blog and thought of you and your family. I am so thankful that Princess Lindsay is home with you guys. Thank you so much for letting everyone be a part of your family. You have such a precious family. Thank you!!

Hi, it's a very great blog.
I could tell how much efforts you've taken on it.
Keep doing!

Okay friend~ I am having issues over here...I need more LINDSAY!
I know you are enjoying that little sunshine!!!

Missing you and hoping all is well. Praying for you all in Austin, TX!
Shane, mommy of twin boys Alex and Sam

Just checking in on you guys. You haven't posted since November 1st. Just wanted to make sure all of you are ok. We miss your updates in blog world.